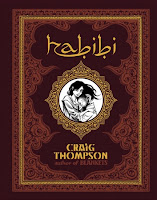 From the sheer heft of it (672 pages!) to the countless plaudits it's received ("A landmark" "An instant classic" "a universe unto itself" etc etc etc) to the fact that it took seven years to complete - and well - just by looking at the ornately beautiful swirling and intertwining decorative elements on the cover (and it's no coincidence that it's packaging makes it so closely resemble a Bible or Qur'an) : it's clear that this is a major, big, fat, important, all-caps type of book: one that leaves any (and all) self-respecting comic fan with no choice: this is something that you need to have read if you want other comic fans to take you seriously (and we all want to be taken seriously - right?).

The long awaited follow-up (like I said above - seven years!) to Thompson's stunning autobiographical Blankets (which you very much need to read if you haven't already had the pleasure) Habibi is an epic meditation on (amongst other things) religion, stories, environmentalism and arabic language wrapped around a fairytale-like love story between two lost souls.

Elsewhere - I've previously described Blankets as feeling like a softly strummed acoustic ballad played with a lone singer and guitar: Habibi (generally) aims more for the head than for the heart and comes across like a big orchestral workout with a lots of extravagant flourishes and virtuoso performances overlaid with complex  squiggles and off-beat time signatures: so even tho it retains his clear and precise artwork the whole feeling and tone is much much different. Less weepy and insular and more elevated and far-reaching...

But what did I think of it? Well... It some way it reminds me of Terrence Malick's film The Tree of Life (which - again - is something you should see if you haven't already) - Habibi is obviously obviously a massively impressive and monumental achievement  (672 pages!) but as much as it kept me gripped and enthralled: and as moving and emotional as the central story was: and as lavish and spectacular as the artwork manages to be at pretty much all points - at the end of it all I was left a little... cold (sorry Craig). In all of it's lumbering majestic glory and intricate designs - by the time it had finished I realised that it gave me to a chance to properly fall inside it - rather - I felt like I'd spent the whole book held at arms length and any emotion that was glimpsed was held underneath the glass: instead of getting a picnic - it's more a trip to the museum: where there's lots of wonders and exciting and interesting things to learn - but a lack (somewhat) of proper deep down human connection. In some respects I guess it's almost as if Habibi's careful structure, and meticulous layout kept me from falling properly in love: it's too beautiful, too splendid, too decadent (at least for my tastes).

Further reading: Blankets, Buddha, Promethea, Cages, Footnotes in Gaza, Jimmy Corrigan, the Smartest Kid on Earth, The Arrival, Maus, From Hell, The Sandman, Don Quixote, Are You My Mother?.