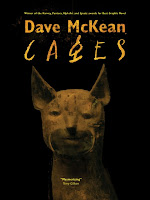 Dave McKean is known - first and foremost - as an artist.

I know about him through all the stuff he's done with Neil Gaiman. There's the early Gaiman comic work (including the dreamy Violent Cases and delirious Mr Punch) which McKean did all the artwork for - there's the children's books (Mirrormask, The Day I Swapped My Dad for 2 Goldfish and The Wolves in The Wall - which is EXCELLENT for reading to and scaring the crap out of kids) and then with The Sandman (which is where I'm guessing most of you will recognize him from) where Mr McKean designed/illustrated every single one of it's darkly beguiling covers - most of which appeared to float up from the bottom of murky yet magic ancient English garden pond (or maybe that's just me?). The place that the rest of you will know him from is Batman: Arkham Asylum: A Serious House on Serious Earth where together with Grant Morrison they plumbed the depths of the Dark Knights psyche and mashed it up with some spooky imagery and tarot card symbology which went on to earn it a place as the Batman book that serious people like to read (and flaunt around: "oh - have you read this? It's very good." etc). Oh - and - he's also done stuff with Richard Dawkins, John Cale and Heston Blumenthal and the people at The Fat Duck Restaurant (all of which are available from Islington libraries - natch).

For those of you that don't know him from anywhere - I'll try and describe his style: guy can do lots in various type of flavours: line drawing, painting and collagey-photography stuff - all of which bear his unmistakable imprint - and all of which are given free rein to go crazy in Cages. His people all have jagged edges with oval-shaped ever-so-slightly feline eyes that exist on the beautiful edge between realism and abstraction - all walking around with this almost animatronic grace (I know that might not make sense - but I don't care): and every single frozen panel he draws always feels perfectly frozen at exactly the right moment (no more so than in Cages).

Anyway. This was my first taste of a Dave McKean solo project. One that I had heard many great things about (whispers from here and there) and which boasted a recommendation from Terry Gilliam on the front cover (to be fair it's just the one word - ""mesmerizing" - but seeing how it's from Terry freaking Gilliam - it carries serious weight - just as long as we ignore his more recent films (oops - sorry Terry)). I must admit that I was trepidatious at the start - I mean - I totally love his artwork but did that mean that he'd be able to write? (how transferable are the skills exactly? I dunno).

Originally published in ten separate parts between 1990 - 1996 Cages is (I'm gonna break out all the highfalutin words - so brace yourself) exquisitely gorgeous, stunningly opulent and completely mesmerizing in all sorts of ways (Terry Gilliam was right!). With a distinctively Neil Gaimansque vibe (which makes me wonder if the right person got all the credit from their past collaborations? Or maybe Neil's spooky trousers just rubbed off some of their magic Dave's way?).

Seeing how it's almost 500 pages long (phew) it's pretty obvious that this isn't a book that should be undertaken lightly. It's heavy in more senses than one (ha). The first thing I wanna say is that - as with most of the finer things in life - films, books, music whatever (and hey - most 'serious' books) - you're going to need to persevere with this one. Especially with the first chapter which is - well - choppy waters (bit purple with the prose there Dave): and also forego any of his splendid illustrations. And then after that - when we finally start to get treated to some of the graphics - it's all very slow going: which suited me fine (I read it all in one go late at night with a bottle of wine and James Holden's At The Controls on my headphones - which I thoroughly recommend as the ideal reading environment if you get the chance).

The other thing to mention is that - although this is a book that appears on a few lists as "Good Graphic Novel To Give To People Who Don't Normally Do Comic Books" - I'd say that this isn't a book that's gonna be good for newbies. I tried to impress it on my flatmate (who likes comic books - especially if they're by Alan Moore - but only tends to read two or three a year) and he had problems getting into - and complained he didn't see what all the fuss was about and begged me to stop banging him over the head with it (and like I said: it's a heavy book). But (methinks) that a lot of the pleasure of Cages is watching it do things that other comics don't and watching it smash boundaries that other comics tend to stay behind. Which means that you need to have read enough comics in order to know where the limits normally tend to be so you can enjoy that illicit feeling of trespass when those limits are breached - kinda like jazz (even tho I must say that I totally hate jazz).

So. What all the fuss is about (and this is very much a book to be made a fuss of): the artwork is damn amazing and my favourite of anything else Dave McKean has ever done (which is saying a lot): as opposed to say - his work on Arkham Asylum which is all dark shadows - his drawings here are clear, bright and pure and offset wickedly by big dark slabs of black. Also - because there's so much (nearly 500 pages remember) and so of the moments between the panels are so subtle - of all the comics I've read it's the closet that's come to being like animation. And every flick and twist and turn of the characters bodies don't just tell you what kind of people they are - but what they're thinking and feeling from moment-to-moment. The best word I could use to describe the attention to detail is - "god-like."

And the story - well loosely it's (oh dear) about the various Cages that people can find themselves in (but ignore that): concentrate instead of the way it affects little small changes in mood, the sensation of falling in love, hopelessness and denial and the complexity and simplicity of music all evoked oh-so powerfully with the words and pictures mixing up.

This is a damn fine comic book and one I cannot recommend highly enough to anyone looking for a strong hit of good reading. Rich and scrumptious and mature in all the right ways - this is almost without doubt one of the best comic books ever created.