Books: Dan and Larry in Don't Do That! 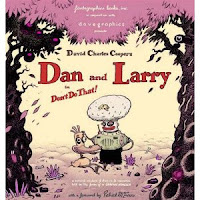 Dan and Larry in Don't Do That!
By David Charles Cooper
2002


So I was working at Mildmay Library and - when there was a bit of free time - I checked their graphic novel stock to see if there was anything I could nab for the good folks at the Comic Forum and I saw this - Dan and Larry in Don't Do That! It was a slim volume with crazy-looking black and white artwork that kinda reminded me of the hyper-berserk-weirdness of Ren and Stimpy [1] which I guess is both a good thing and a bad thing [2].

I kinda let it sit on the side for a while - until - eventually - stuck with nothing else to read - I decided to pick it up. And well - It's a very slim little book that only took about 15 minutes to get through. And for most of my time reading it I struggled to see what the point was. At the time I was a little worried that I had never even heard of "Dan and Larry" and thought that maybe it was part of a wider thing - maybe there was a TV show that I didn't know about that it was connected to? Or maybe there were more books that preceded this that I needed to have read in order to get what was going on? But no - checking things out afterwards it seems that the title is deliberately misleading and that (well - so far at least) there are no other Dan and Larry books out there.

The other thing that sorta tickled the edges of my brain was that - even tho everything takes place in a mutant world where the main character is a duck and the other guy has this big oozy mushroom head: there was this certain - I dunno - aspect to it that made it seem like it wasn't just a bunch of crazy cartoon adventures. Of course it was at that point that flicked to look at the cover and saw the little subheading: "A surreal mixture of dreams and memories." at which point I was like - oh - right. Because yeah - judged as little mini-adventure of two best friends - well - there's loads of pieces that don't quite fit and all these strange sort of tangents that go nowhere - but when you look at it and realise that it's bits of someone's life that they've refashioned into a new shape (with a bunch of dream imagery mixed in) then - yeah - it takes on a new dimension and becomes a lot more powerful and - frankly - disturbing. And by the time it ended I felt like I'd been dragged all the way through the tubes and guts of this guy's unconscious mind and learnt a few things that most people like to keep hidden away.

Make no mistake: It's a very harsh and unforgiving book: one review (the Christian Perring, Ph.D metapsychology one below) says: "This work will certainly appeal to a good number of deviants." (and I can't tell if he's joking when he says: "It goes without saying that most right-thinking Americans will view this artwork as typical of the odious creations of countercultural slackers, and it is no surprise to learn that the artist lives in Canada."): normally the stuff I like to read is clear and to-the-point - and this is muddled and woozy: like when you full asleep on a hot sunny day while you're still wearing all your clothes - it's certainly different: but that doesn't mean that I wouldn't recommend it.